A Day in Oakville: Corbett's and Whole Foods Market 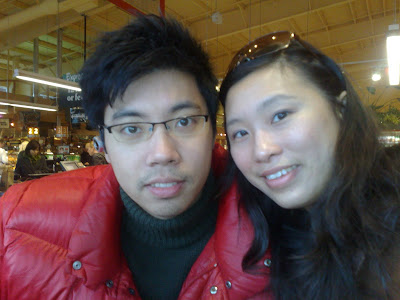 It's been more than 3 weeks and we still haven't managed to get to either Sherway Gardens or Yorkdale - but that's not to say we didn't have a good time spending a day in Oakville this past weekend. After Dim Sum, we took B's set of snowboarding gear to Corbett's to have it fixed up because he was having trouble with his new Flow bindings. Flow was supposed to make it easier and quicker, but B somehow ended up spending more time to get strapped in at the top of the hill, and he was having trouble coming down the slope too because the heels of his boots would come up and away from the base of the binding when he gets on his toe-side, making it difficult to carve. We knew we had to get it fixed but we didn't know how to do it ourselves, so we decided to bring it in to have the pros do it. We got a hold of Scott, who's helped us pick out B's boots and bindings last time we were there, and in one look he could tell it wasn't done right. He said it could be done in an hour, so we dropped it off and went over to Whole Foods.

I was intrigued by the store as we passed by on the way to Corbett's, and boy were we glad we made a stop there. The store was AMAZING. What a shopping experience! Everything was tidy and neatly arranged, and there were samples throughout the store. With the airy wood and stone interior and plasma TVs hanging from the high ceiling, it was like a fancier version of Longo's or Michael Angelo's.

Once we walked in we were greeted by neatly-arranged piles of apples and other fresh fruits - all natural/organic and most locally grown. Then we saw exotic fruits that we've never seen before - tamarillos and other funny looking ones - right next to the tropical fruits like purple mangosteens (yum!) and red bananas that are rarely found in this part of the world. We saw giant leeks and heaps of kale, fingerling potatoes and a yellow monstrous-looking citron that's called the "buddha's hand". We ventured into the seafood and meat section next where we saw really huge fillets of mahi mahi, nice cuts of beef, chicken fillet rolled up with feta and spinach, and fresh sausages in interesting flavors such as blueberries and liver.

We saw a slab of organic butter going for 10 bucks, and milk in glass bottles reminiscent of what we used to get in Hong Kong. We saw organic cleaners and skincare (a whooping 60 dollars for a small tube of rich and aromatic rose hand cream from Jurlique), and tried on some organic water-based nail polish that dried in seconds. Then we saw the wonderful cheese counter, filled with wheels of parmigiano-reggiano, pecorino romano, fancy floral goat cheese, smoked gouda, and it just went on and on all the way around the little work area where the wheels of cheese are cut. I picked up some nice cheeses that I haven't seen in regular grocery stores and had a hard time limiting myself to just a few kinds.

There was a stone/clay oven for fresh pizza, facing a salad bar with 2 aisles of interesting variety, right next to the bakery section smelling like something's just come out of the oven. I could hardly peel myself off the beautiful cake display when B suggested that we try a slice of the taffy apple cheesecake. We paid and found a spot to sit down and enjoy our afternoon treat. It was one of the best cheesecakes I've ever had! The crunchy taffy caramel covering soft cooked apple slices subtly spiced with cinnamon (B couldn't taste it), and the buttery crust that was hard to the fork but melted in our mouths, all enveloping the rich creamy centre that almost tasted like ice cream - it was heaven!! We devoured it and wanted to bring one home for dinner, but they only sold the cake in slices ($5) or as a whole ($30) - the slice would be too little but the whole cake would have been too much for the 5 of us at home. 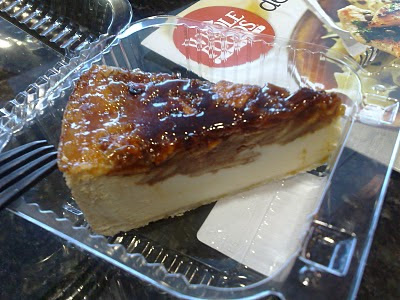 So instead we brought home the equally tempting tiramisu cake, which we devoured before we remembered to take pictures of. Lined with ladyfinger cookies all the way around, the tiramisu cake was another piece of heaven - despite the cake collapsing and falling apart while cutting. The mascarpone cream was so light and just sweet enough, and the ladyfingers layer was just the right texture - not soggy, not soft, but almost chewy and melted on the palate and provided just the right base for the light and fluffy cream. Even Dad had seconds, which is rare for desserts. I can't wait until the next time we visit the store and pick up some more goodies!