Finally got to visit St. Lawrence market over the weekend and I'm already working on a list of what else to pick up next time we go... even though we only had a wee bit of time before the shops closed (we spent just a tad more time looking at makeup and other designer stuff than originally planned) I had managed to do quite a bit of damage - so I guess it was a good thing we didn't get there too early in the afternoon.  Plus, a friend said that it's usually really crowded so if we had gotten there any sooner it would have been too jam-packed for us to really enjoy ourselves.

Our friend picked up a bottle of mustard he's been thinking about since the last time he was there (and had regretted not getting it then) from a little stand that offered all kinds of mustard you could imagine - hot, sweet, smokey, you name it.  Though I like mustard on my steaks, I got distracted soon enough.  The first thing that called out to me in the vast market was this beauty: 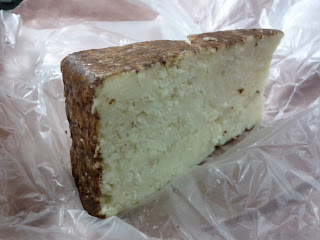 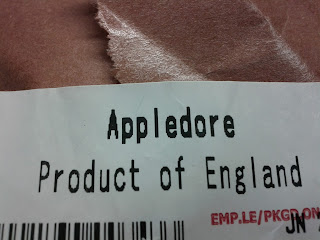 I hadn't been able to put it down once it's caught my eyes. The shopkeeper offered us a sample and I knew it would be coming home with me - the crumbly yet creamy texture with sweet flakes of apple and faint aroma of cinnamon tasted just like an apple pie enveloped in cheddar cheese - the perfect combo of savory and sweet.

We also left with a wedge of white stilton with mango and ginger pieces and another wedge of applewood smoked cheddar, since we were going over to Marcel's place for dinner, wine and a movie (no I wasn't going to share my appledore): 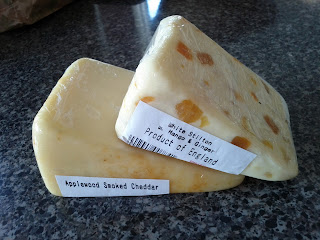 Reluctantly walking away from the cheese stand, we went down stairs to find the caviar shop closing and nothing spectacular at the chocolate shop (which I held high hopes for).  But Mish highly recommended the mushroom truffle dip/spread, which could double as a pasta sauce, and I was smitten at first bite: 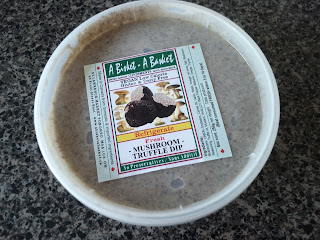 Of course I had to pick up some treats for Dad, who would love these pates: 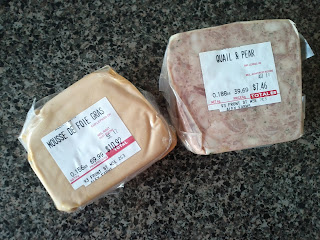 I think I would have come away with even more if we were heading straight home - there were quite a few interesting meats I'd love to try, like kangaroo, which looked like lean beef, and emu and bison.  And the sweets - the tantalizing pastries were just begging to come home with me... maybe next time - which will hopefully be soon!