The second birthday in the family in November, in less than a week since Dad's birthday. I figured that my family and B must be sick and tired of sponge cakes by now, so instead I made a cheesecake for my brother's quarter-century birthday. And the card I got him has a mouse on it (well, he is a mouse in the Chinese Zodiac) that reads "Cut the cake but not the cheese!" - so we were gonna give him the dilemma of a cheese-cake. 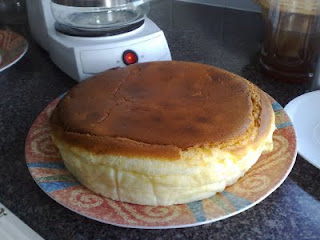 This is a recipe from Eupho Café that was published a while ago in a weekly "Gourmet Supplement" by the Canadian version of Ming Pao (明報). Dad has been bugging me about making cakes that would suit our family's taste - which is quite different from the Western-Style cakes like the ones you would find in the local supermarkets or bakeries. Western-Style cakes are almost always too sweet and too heavy for their taste. In fact, Dad would wince at the sight of a cake box from any non-Chinese bakery.

Anyway, this recipe is substantially different from the regular cheesecake recipes - more eggs, less cream cheese, much less sugar. But the most unusual part of it all is the way the batter is made - the eggs are separated and the whites are beaten to soft peaks to be folded into the rest of it being baking in a bain marie. The top is browned to a nice golden color at high heat for 20 minutes and then the heat is reduced to continue cooking for another 40. The resulting cheesecake has a subtle cheese flavor, but is so fluffy and light that even my parents were reaching for a second serving. And I have achieved the unimaginable - Dad actually suggested that I put in just a teeny tiny tad more sugar next time around. Which NEVER happens because he finds everything I make too sweet.

I had extra batter so I made 2 mini star-shaped ones on the side - but these weren't tall enough to avoid being submerged in the bain marie, so like soufflés they collapsed when they came out of the oven. I intended them for Michelle, but we devoured them over the weekend so she will have to wait until I make them again.

For my brother's birthday dinner we settled on Tako for teppanyaki, because Japanese food is always a crowd-pleaser and that place is close to where he worked. For $19.95 per person (plus tax and tip) we feasted on green salad, sushi, lobster sashimi, mussels in sake broth, grilled scallops-in-shells, grilled lobster, steak, lamb, grilled veggies, fried rice and dessert. And we got to enjoy watching the chef doing his tricks while he prepared them on the griddle right in front of us.
Posted by Unknown at 1:39 PM