Moose Reviews: Guru Lukshmi
Claiming "your search for a good dosa ends here", Guru Lukshmi lived up to its expectation. I have heard rave reviews from my colleagues since the beginning of the year about how good the food is, but haven't had a chance to try because this restaurant only opened in the evening during the week. Well, that changed recently and Guru Lukshmi is now offering lunch from 11:30 am to 3 pm. We sat a date for all of us to go, but in the end only 4 of us made it. But that's OK, because it states on its on-line menu that a 15% gratuity will be charged for groups of 6 or more.

The interior was pleasant - I was somewhat worried about it seeing how Dosa Corner, its former incarnation at Newin Centre on Hwy. 10 and Dundas, had looked like. Dark wooden tables play off nicely against the stone walls and the asymmetric layout of the booths kept things interesting. It is a small restaurant and reservation is highly recommended. Through narrow and crowded aisles we were lead to a booth in a cozy corner. Most part of the menu was devoted to dosa, of course, but there were other appetiziers and rice dishes offered as well. There is also a thali available for $9.50 - which is not bad of a deal judging from the size of it on a few tables over. We were offered water in stainless steel "glasses", which apparently is how they do it in India because my colleague gave a nod of approval for the authenticity of the restaurant.

I was opting for a paper dosa, which I have heard so much about, but my dear colleague advised me to try something with a filling because the paper dosa does not come with anything except for chutneys. She recommended a Pav Bhaji Dosa ($9.50), which is filled with mixed vegetable, and 3 of us ordered that. Another colleague had the Mysore Bhaji Dosa marked with 2 chilis on the menu. Luckily the restaurant offers their food at different spice levels: mild, medium, spicy or extra spicy. I stuck with the mild option, and even the waitress stopped my colleague from ordering a spicy and insisted on medium instead because their food "is much spicier than other restaurants."

The food did not arrive for at least 10 minutes, but they have already put warnings everywhere about the wait - "We do not give you pre-cooked food." It's understandable, because dosa is only good when it is hot and fresh. They looked amazing though, and tasted even better. The humongous crepe almost overflowed from the tray and was served alongside a small bowl of sambar with a green chutney (coriander and coconut), an orange chutney (not sure what it is but it was sweet and tart - kind of like ketchup) and a white coconut chutney. The food was quite spicy - my colleague was glad she followed the waitress' advice. 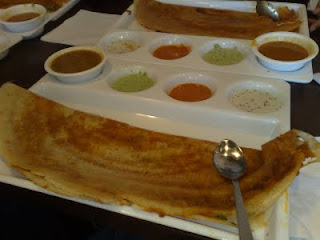 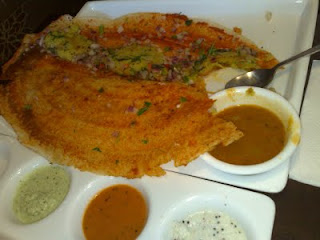 I finished the whole serving except for the sambar because I am not a big fan of lentils and it is probably an acquired taste. The chutneys definitely helped to kill some of the heat - otherwise it would have been too spicy for me. I must have had at least 4 glasses of water because I was feeling so bloated when we left. Service was not quite quick enough but forgiveable because it was so busy. They weren't unwilling when my colleagues asked for extra sambar nor when I asked for water for the 5th time. Payment is made at the cashier which seemed to always have a line-up, and gratuity is already included. The only thing I have to complain about is the burning sensation in my stomach now - not a problem at all in this chilly weather.
Posted by Unknown at 3:53 PM