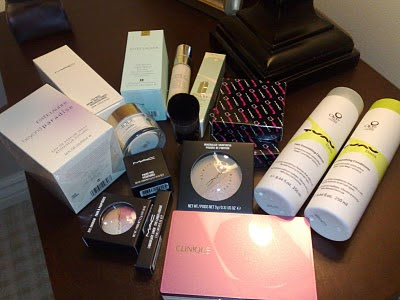 After much drama I managed to get tickets for Michelle and I to go to the Estée Lauder/M.A.C. sale together on Friday. This thrice-a-year sale is by invitation only and apparently a ticket can fetch up to $30 on-line (even though the ticket explicitly states that it is not to be SOLD). I got one pass for Saturday, but thankfully a colleague was kind enough to give me her 2 Friday tickets so my friend and I could go together.

Because the sale was only open until 8 PM on Friday, I arranged to come into work early to leave early. However, it didn't exactly turn out the way I intended it to - I still missed my goal by half an hour even though I woke up 2 hours earlier than usual. Instead of taking Hwy. 401 directly from work, I took a little detour - went on Derry Rd. all the way to Airport Rd., which took me to Hwy. 409 and evetually the 401. It was definitely more complicated and convoluted, but I am sure it also saved me a lot of time because rush hour traffic on the 401 is horrendous - especially on a Friday afternoon. I by-passed a large chunk of the traffic jam on the 401 but it was still bumper-to-bumper until after Yonge St. It took over an hour and a half to get to Markham, but I guess it would have been worse if I had gotten on the 401 from Mississauga Rd.

Michelle and I met up at 16th and Woodbine and went up to Markham Fairgrounds together - that part only took us about 10 minutes - and we were quite eager to get in. Thankfully there wasn't a line-up and we went straight in. It was quite crowded at the tables, so despite our plan to logically follow a route, we ended up having to go here and there to avoid being elbowed by older ladies who were not patient enough to wait their turns. We found good deals from parfum to make up palettes to brushes to gift boxes, and I ended up doing close to $400 worth of damage. In return, I got the Estée Lauder's Advanced Night Repair, a Clinique travel case with mascara, blush, eye shadow and lip gloss along with 3 small brushes, a beautiful kabuki brush (that I have always wanted) from Estée Lauder, an "*magic illuminating liquid potion" from Prescriptives, a liquid blush from Clinique, some Hello Kitty limited edition powder compacts from M.A.C., a shampoo/conditioner set that is organic and sulphates-free, a bunch of other makeup stuff to experiment with, some gift sets and about a hundred dollars worth of stuff I picked up for my colleague. 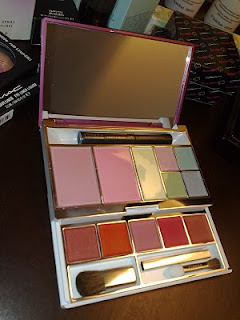 We had so much fun trying on all the different shades of eyeshadows and powder, and while we were there we stuck up a conversation with this lady who seemed to be working for M.A.C. "Ooh I can't believe they have it here!!" She would proclaim, "this is selling at our counter for double the price!!" Of the M.A.C. paint pot she said "I use this every day, it's great!" before trying it on her hand to show what a difference it makes - the color of the eye shadow shows up so much more intensely when applied after this eye primer. Of the Hello Kitty compact she said "don't worry this won't be too yellow on you, it's more of a peachy color and it will give you a nice glow." So guess what? I picked up one of each item she recommended. She must be a really good salesperson :) 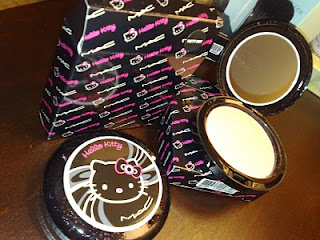 By the time Michelle and I had made the rounds (from the first Hall to the second to the last then back to the second again to pick up more stuff), they were shooing us out. Some workers there started to behave less than polite, but it make sense - they can't go home if we don't go home. We had no trouble finding our car on the way out, because there were hardly any cars left in the parking lot and we spotted it right away. We met up with our BFs for a nice Japanese dinner afterwards - I think it was called Ichiban - and we were so exhausted that all other plans for that evening were cancelled so we could go home and sleep.

The extra Saturday ticket I gave away to the same colleague I picked up stuff for - and she ended up calling me on Saturday asking me to go with her. As I stood in the line with my colleague I couldn't stop thinking how CRAZY I must be to be there again. This time we arrived there around 1:30PM and the line-up was huge! We waited for almost 30 minutes until we got inside. There were a lot of "I should have picked up more of those" and "I should have bought that too", but I had an idea of where things were, and we knew we were under a tight time constraint, so we were quite quick and efficient in making our buying decisions. I had to exercise my self-restraint - otherwise I would have picked up a lot more cosmetics to play with. (Say, why would I need 3 different eye liners all in similar colors and why would I need 5 different lip glosses when I'm too lazy to reach for anything other than my lip balm?)

Somehow I still managed to do another $400 worth of damage - even though what I bought was not entirely for me. I am still reeling in the fact that I just blew so much money in one weekend, but looking at my new skincare and makeup collection, I have resolved to be better to myself and make use of all that I've bought.

P.S.
This is me at our department's Christmas Party - wearing my new Prescriptives *magic illuminating potion and Clinique up-lighting liquid illuminator blush.