a mix of sun and clouds with isolated showers

That's what my day was like yesterday: a mix of sun and clouds, with some rain. I guess when you get good news you always get some bad news too, and when you think it has to be one of the worst days ever you'd hear something makes you think otherwise.

It was already not a happy day to start with because yesterday was the last day for a colleague that started in this company around the same time as I did. Then there was the news that our company is no longer privately-held - the acquisistion deal has gone through between the Big Pharma Inc. from the States and our parent company. I didn't think that I would be affected so much because I have only been here for a year and a bit, but afterall this was my first job in this industry I have always wanted to work in, and I was a little sad that the company where I started my career may no longer exist.

In between talks of what might happen to us in the future, I found out that Michelle and I might be able to go to the MAC sale together this weekend. I have been looking forward to it as my stash from the last sale has already been depleted, and all the more excited because I would get to go with Michelle this time. The colleague who was leaving dropped by to say goodbye, and I managed to sneak him the little bag of baked goodies I had prepared without getting caught. Yes, I had to "sneak", because I get teased to no end by the ladies I work with everything they see me talking with him. I am more than a little bummed out that he is leaving, but I am glad to see him landing a job that he will probably find more rewarding.

Then came the news that we might get bonuses this year - I had never gotten bonuses because my first full-time job was at a business operated by Chinese people, and Chinese business people are famous for being stingy. Anyway, this is going to be the FIRST bonus I get and from the way the others are talking about it it may just make a really nice christmas/birthday gift! However, there were also talks of how they hand out bonuses on one hand and a pink slip on the other hand... So we don't really know if it's all good news.

After work I finally went to the Bay to return some impulse purchases, and stopped by Bulk Barn to pick up everything we needed for our gingerbread house project. I walked around the store with my little shopping cart and filled it up with shiny and colorful decorations - ready made icings, mini satin candies, chocolate teenies, gum drops, mints and sprinkles. I even picked up some chocolate pebbles to use as a walkway around the house. I found most stuff there, but I still can't believe the silver dragées were all sold out!! I stopped at another candy store on the way out of the mall and again at No Frills with no luck. I was quite disappointed and still feel that way when I look at what our house looks like now. 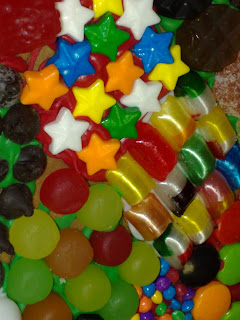 Well, other than the missing silver balls, we went ahead with decorating our gingerbread house - my first time making one. That was so much fun! Although we both think that I was overdoing it - especially on my side of the roof. I wonder if the roof will stay up because it's honestly quite heavy.

By the way, we decided to decorate the separate pieces of the gingerbread house before assembling it. It was only when we were cleaning up we found the instruction that we were supposed to put the house together first. Good thing we decided to finish one house before we start the other one, so if this one doesn't hold up at least we have another chance to make it right. 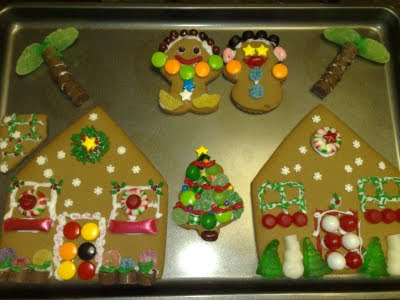 Labels: adventures in the kitchen