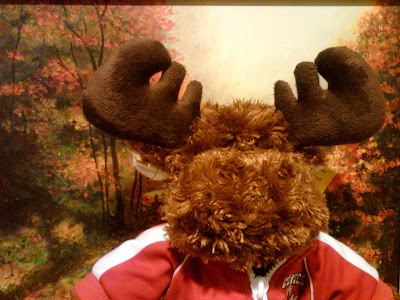 On Saturday we diligently went to Goodlife to work out, then headed out to the mall to pick up Moose. We have been wanting to pick him up from Build-a-Bear Workshop a while ago, but something always comes up (when we still had the nice weather and all) and when we finally set our mind to it last weekend, we found out that Markville Mall doesn't have a store! Apparently, Build-a-Bear only has shops around Toronto - Mississauga and Hamilton and Vaughan and Oshawa (and even London and Kitchener each has a store) - but not a single store in the city. So this weekend we made sure we would go to Square One because that's where I saw Moose for the first time.

The store was very busy, with little kids running around and their parents going after them. There were groups of older kids too, and then there were us. I was quite upset and disappointed when I found that Moose was gone - the only moose they had was the holiday edition named Holly and Hal. Hal has a string of christmas lights dangling on his antlers, while Holly (who has not antlers) look more like a skinny hippo. They were nothing like the Moose that I fell in love with.

I was about to leave with a frown but B. insisted that I should check with the store lady, so I did, and pleasantly she informed us that Moose was still available, but he was just hiding in the back to make way for the Holiday moose. I was almost overjoyed! We did have to wait for a bit because it was quite busy in the store and they were understaffed so nobody had a chance to fetch Moose from the back for me. It was worth the wait though - even B. found him adorable!

After we finally got the moose skin, we had to stuff him - with plenty of fluff and a heart. We then had to brush him and fluff him before we dressed him up. There were so many outfits to choose from! It was a good thing that B. decided that Moose would be a boy, because that limited the choices by half. There was a really nice Harley Davidson faux leather jacket that fitted Moose just right, but I would have to say Moose was most handsome in his RCMP uniform. We ended up putting him in a red and white track suit that says "Canada" because it was a zip-up. I'd have to say, he's very good-looking :) 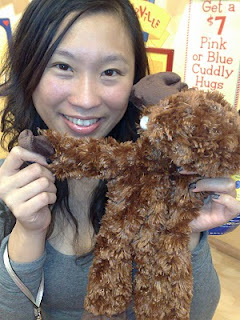 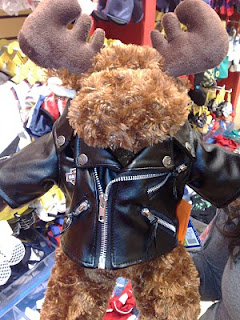 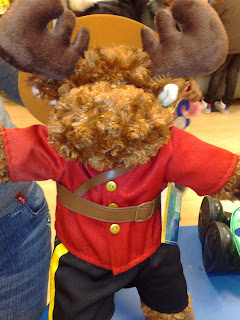 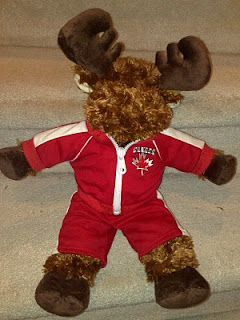 Today I made B lunch and dinner and after dinner, made my third attempt at Sponge Cake! I was reminded on Friday that I will have to return the stand mixer soon, so I thought I should at least master this one recipe before that happens. We have extra large eggs that we picked up from Costco, so I only used 8 instead of the 10 specified in the recipe. I found these XL eggs are a lot more difficult to separate the whites from the yolks - and the yolks broke more easily and the whites seemed to be more watery. Other than that I followed the recipe to the tee, except for the cooling part (again). So far I have not had a single time where I was able to fend off B and my family before the cake has had proper time to cool.

The cake had collapsed before it came out of the oven just like the last few times I made it. And this one turned out darker too, even though the temperature and rack position remained the same. I found a small section in the middle of the cake to be denser than the rest, probably because the batter did not get properly folded into the whites. They all loved it nonetheless, and Dad even said it was almost perfect. I already got a request for another attempt - seems like they're not sick of it yet.
Posted by Unknown at 10:05 PM