Moose in the Kitchen: Holiday Baking # 3 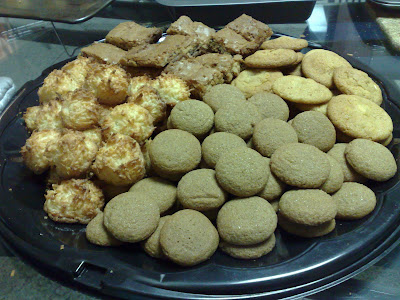 Since it was decided that today would be the day for holiday treats at work, we set to work on the rest of our cookies. I think Michelle and I make a really good team in the kitchen - we set up an assembly line of sorts where I would portion the dough, she would roll them and place them and flatten them on the cookie sheet which I would then stick into the oven, and I would remove the tray of cookies from the oven and she would take them off for cooling. She was also in charge of QC - anything that didn't pass her inspection ended up as being samples for us and for my family. We were quite efficient, as a matter of fact, that by the time we were done we had more than enough for both of our trays. All in all, our bake-off was a success, and the extra cookies will be packed to become gifts for my dear friends. 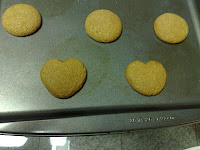 I had doubled the recipe for the ginger cookies seeing how I had to keep making more batches last Christmas, but at the same time we had decided to make smaller bite-sized cookies. In the end, we must have gotten over 15 dozens of them. Michelle was also the creative one - she made little heart-shaped ones and ones with smiley faces and these turned out absolutely adorable.

I also started the batter for some coconut macaroons but as it was running late I had to finish those on my own. It was much less fun to bake by myself but I was kept busy by the fact that these macaroons were quite tricky to form. The recipe called for a chocolate drizzle after they have cooled, but Michelle and I both thought these little golden balls were already sweet enough and didn't really need the extra touch. Plus, it was getting late and I was alone and I just wanted to be done with it. They were still very popular though, because these were the first ones to run out on the table. 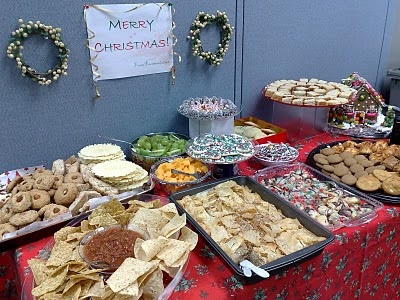 Also popular was my Italian coworker's authentic biscotti and pizzalle - they were so yummy I couldn't stop snacking on them throughout the day. There were also homemade salsa and some cheese and fruits, among other treats, and a very gooey "holiday bar" topped with red and green cherries and way too much condensed milk.

I brought in my gingerbread house too to share with my colleagues, and everybody complimented it. The gingerbread people and the trees were long gone; however, nobody had wanted to break down the house. At tea time I had to make the initiative to break part of the roof (also because I really really liked the tangy candies on that part of the roof), and my boss took over (who couldn't get over how much fun it was) while my colleague finished the job (because she just had to disassemble everything else even though she only wanted a small piece of it). 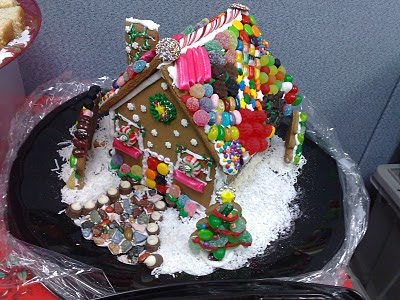 I am so full that I don't think I will be able to have any supper.
Posted by Unknown at 4:38 PM

Labels: adventures in the kitchen