To raise funds for SickKids our Volleyball Team has decided to run a bake sale - so I made these fortune cookies with a thank-you note in each of them: 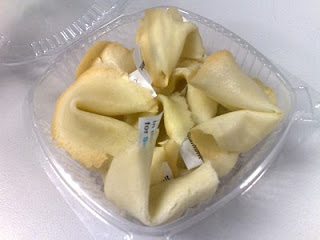 Posted by Unknown at 3:43 PM No comments:

Labels: adventures in the kitchen, IceWave Volleyball Tournament for SickKids

Since our company mascot is named Morty (and he appears on every box or bottle of our product) - our volleyball team is named after him.  Only half of us made it to the second practice, but I think I'm getting much better, thanks to the coaching from the other experts on the team.  Still need to tone it down a bit though because the ball is still flying off the court almost every time I touch it.  I hit way too hard and power, apparently, is not the name of the game.

The tournament is happening this Saturday and I'm getting butterflies!!

Support us in the 2010 IceWave Volleyball Tournament for SickKids to fight childhood cancer!!
Posted by Unknown at 2:34 PM No comments:

How to Deal with "Leeches"

This morning, I came across this interesting and quite useful self-help guide on-line regarding manupulative behaviour and how to recognize a "leech" -  sound advice on how to deal with one when you realize you're being taken advantage of.

Yet despite having recognized one right here in the office I find it hard to confront her - afterall being coworkers we do spend a significant amount of time together whether we like it or not.  That is, of course, unless something happens and we don't work together anymore.

Anyhow, the topic of a "leech" was intriguing enough for me to google other opinions, which led me to Productive Flourishing where a wonderful account of leech removal can be found - even the real, slimy, yucky kind.
Posted by Unknown at 11:16 AM No comments:

I only made it to the gym once this week for Zumba, and even then we couldn't finish the class because there was something wrong with the air conditioning and the studio was getting so hot and stuffy that we sweated more than we would have in the sauna.

And yoga didn't happen yesterday.  We wanted to wax our snowboards last Saturday - I knew I wasn't gonna have time during the week and we were not doing anything until later on - but no, Dad insisted that he be there when we do it and he insisted that we do it later.  Well, that "later" happened to be the same night as my Yoga class.  It also happened to be a night when I don't have B around to help me with it.  In the end we managed to wax all 3 boards, but somehow there were grey streaks on B's board.  Maybe because our boards were black on the bottom so it's not noticeable and his was a neon lime color so it showed.  *shrug*  It didn't happen on my board, so I guess it's OK.

Despite missing gym time, I did attend our Volleyball practice - this is our second year participating in the Icewave Fundraising Tournament for SickKids.  It was also my second time playing volleyball.  (Hey, they did say newbies were welcomed!)  Now I'm typing with purple thumbs and bruise marks are also showing up all along my forearm!  But it's all for a good cause because without money going into cancer research these poor kids won't see advances in medicine that could help them.  If you'd like to become a sponsor for our team, go here to donate on-line.

And that's not all, I have badminton lined up tonight and a day at Blue Mountain tomorrow - I'm so excited about snowboarding with Mish and Em again I can hardly wait!
Posted by Unknown at 3:45 PM No comments:

What's with people who drive 50 km/hr on the fast lane on the 401, when there's no cars in front of him for a good kilometer or more? Granted, there was a little bit of snow on the ground, and it's good to be cautious. But if you can't manage it, move on over to the right lane and block traffic there instead! It was more dangerous with cars swerving to get pass the slowpoke. No wonder people get road rage seeing people who can't drive being on the highway.
Posted by Unknown at 10:27 AM 1 comment:

Today we were assigned the task for completing a "Goals and Objectives Form" that outlines what we'd like to accomplish in 2010. To be honest, I haven't even started thinking about my new year resolutions yet (and we're already in February). Maybe I should write down my personal goals this year along with my goals at work:
1. Lose weight.
Seriously try to lose weight. I know I've been told that I'm not fat, but that's only because I hide it well. Forget "how to look good naked" and coming to terms with my body and all that stuff - you know you've put on weight when you don't fit into your pants anymore and that sweater you got last year became snug.


2. Lose more weight.
Yea, OK, I'm obsessed. I can't help it. I used to be three-quarters of what I am now and I need to lose weight to get back to where I was.


3. Get fit.
So I can run across between the offices without getting out of breath.  (I do walk briskly - the only time I have to run over to the main building is when something urgent's come up, and even then I'd have to stop and catch my breath.)  Truth is, I have no core strength neither.  I found an exercise plan for abs on the internet that entails a lot of sit-ups and planks, and I plan to stick to it.


4. Get organized.
Starting with my room.  I figured that I should at least have cleaned up my room before I move out of the house.
Posted by Unknown at 4:44 PM No comments:

It was the last weekend in January when the annual Winterlicious started.  Having made reservations early this time around, we were able to book a table at Park Hyatt's Annona Restaurant.  It was something I've always wanted to do, and it has been a while since we had gone out for dinner at some place fancy with just the two of us, so I was really excited when the weekend came.

It also turned out to be the coldest weekend this winter yet, which posed the problem of whether to dress up for the occasion and freeze to death, or to forgo the semi-formal little black dress to wear something more reasonable with this weather. It made me wonder: what do people wear to formal occasions in the dead of winter?


In the end, I opted for a purple skirt with a ruffled top in the same color underneath a grey sweater with pink and purple stripes paired with grey stockings.  That was the best compromise I could do for looking somewhat presentable while being warm enough at the same time.  Meanwhile, we saw girls hopping off a range rover just outside the hotel wearing nothing more than tank tops and mini skirts.  I guess they didn't have to deal with the dilemma when there were reporters waiting at the door to photograph them.


Before we went downtown, we stopped by the snowboard blow-out sale advertised on Kijiji.  It turned out to be the same place where B picked up his Signal snowboard.  Nothing much to see there, in terms of actual gear - there were some boards from Hummingbird and High Society (both of which I've never heard of) and boots of limited sizes.  We went on-line and found their websites but there weren't many reviews so we didn't want to risk it.  They did have quite a bit of accessories.  B and I picked up some wax and a gummy stone (to get rid of rusts) for 5 bucks a piece, and there were insoles for 3 dollars.  The insoles were only available in size 12 but fitted into B's new boots just fine after trimming.  My backshop boot fitting foam apparently needed to be applied in between the inner shoe and the husk of my boots (?) - while I didn't even know that they could be detached, so I still haven't tried it yet.  They also had Burton locks going for 5 bucks each, which is a great deal because the cheapest one we saw in a regular store was 20 dollars.  We lingered there for a good hour or more, and by the time we got downtown - St. Lawrence Market was already closed!


I had hoped to visit St. Lawrence Market just because I've never been, and I've heard so much about it - mostly about the foods.  And it being downtown, I thought it was the perfect opportunity to check it out because we don't get to go downtown very often.  (B hates the traffic and I can't handle driving downtown with all the streetcar tracts and one-way streets and jaywalkers)  It had actually just closed when we got there just a bit after 5 PM.  The dinner reservation was still 2 hours away, so we decided to find a little coffee shop or something because we've already paid for the parking and it was mighty cold outside.


We found parking just behind the Park Hyatt and didn't have to walk far to get to Annona.  The restaurant was busy but the vibe was drab from the decor to the servers.  We had to wave down a server to get the menu and some water after being seated for 15 minutes. It didn't take long to decide since there were only so many options in the prix-fixe menu.  The smoked salmon on blinis were ordinary, as was the fish and the braised beef ribs.  The desserts were better - but all in all, it was decided that it's not a restaurant we would want to visit again, even if it did offer better value than Winterlicious.
Posted by Unknown at 3:06 PM No comments: