Last night we went to Glen Eden rather than the originally-planned Horseshoe Valley Resort to snowboard because it was much closer - meaning less drive time and more play time.  It was also Feifei's first time skiing, so we didn't want to be too adventurous and Glen Eden was just big enough a mountain for her to conquer.  Night ski passes ran at $30 + taxes per person, unless you only want to stay on the beginner slopes on the other side of the road, which were short and very crowded.
The slopes were considerably smaller than Horseshoe Valley's and I absolutely loathe the lift-landings at Glen Eden - they are all really steep and really narrow, translating to a fall-off-the-lift ratio of about 9 in 10.
We still had fun though - we split off after a bit but it was the first time we got to go with my brother and probably one of the very few times that he would be able to come out and play.  I only got to snap a few shots with B though - 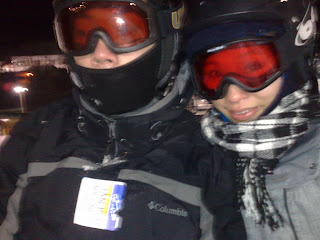 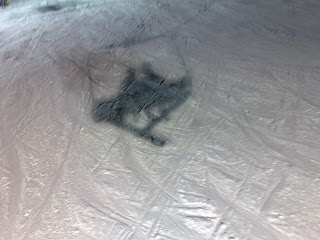 We made it home in about 30 minutes and there was hot pot waiting for us - it was the perfect ending to a perfect night of fun!
Posted by Unknown at 6:27 PM